BILS- Social Dialogue, Gender Equality and Decent Work Project, with the support of Mondiaal FNV organised a two-day advance training titled, “Advance Training on Gender Based Violence at Workplace in RMG Sector” on August 31-September 1, 2018 at BILS Seminar Hall. The training was organised aiming to determine activities of Trade Union in case of protesting gender based violence at workplace and to enhance capability of national Trade Union Federations.

Main objectives of the training were to build capacity of the participants for analysing gender, gender based violence and gender discrimination at workplace, analysing existing law and punishments against sexual harassment at workplace according to national and international law, declaration and standard, analysing to acquire knowledge on gender policy in Trade Union and to conduct activities, describing to define the activities of Trade Union in order to protest gender based violence. 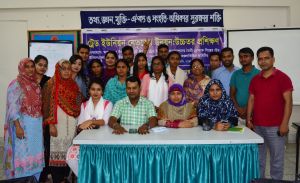